The June 2011 building of the Nancy Russell Memorial Overlook

In June the Cape Horn loop trail explodes into a vibrant Delphinium bloom.  Sadly, the lower portion of the loop is closed for raptor nesting until either July 1st or 15th.  But, at the top, near the overlook, the forest blooms a vibrant blue, as seen here: 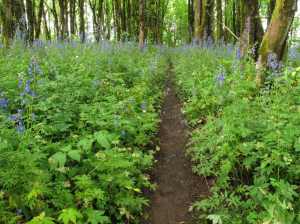 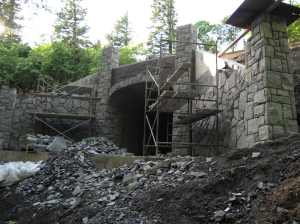 The Hwy 14 underpass being constructed, June 2011

A local nature lover, Dan Huntington, is largely to thank for creating the Cape Horn loop trail.  Dan worked arduously to “re-discover” an old overgrown path amongst the cliffs and then he and a legion of volunteer friends cleared most of what now is the trail tread….eventually leading to the Forest Service purchasing the necessary private properties to enable the trail to become a public, legal loop trail.  Hooray Dan!!   Thanks for personally showing me your trail in 2005 and encouraging me to write about it in my second edition.

This next pic is one of Dan’s creek bridges.  The Forest Service is now replacing these plank bridges with proper expensive trail bridges, so I wanted to photograph the old ones before they were replaced.  This pic lives on Google earth as the “Dan Huntington Trail bridge”. Look for it! 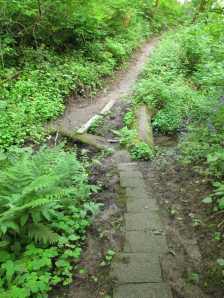 An early/mid-day rainbow at the falls

Over the years I’ve seen many-a amazing sight on the Cape Horn trail. Here are some favorites:

Mist in the Cape Horn trees

Nowadays the lower portion of the Cape Horn loop is closed in the wintertime, but one January I visited when the Gorge was zero-degree cold for a week as the vicious east winds blew. I decided to take a look at the Cape Horn waterfall. The waterfall was neat with an icicle-framed rainbow, but wgat was astoundingly better was the small little creek west of the waterfall that the wind was blowing uphill.   “Oh my God” doesn’t come close to how impressive this icy amphitheater was!!! 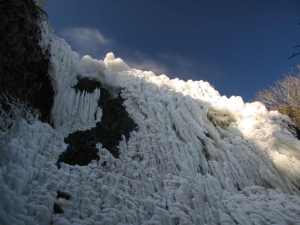 Wow, I’ve never seen icicles try to look like a porcupine.  I called Ddan up to tell him and the next day we returned together to photo this spectacle.  Unforgettable to say the LEAST!!

The movie twilight filmed some scenes atop Cape Horn.  Here are a couple of screengrabs from the movie: